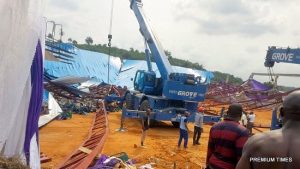 Akwa Ibom State government said it ordered the demolition of the Knowledge of God Ministry, Uyo, to avoid community transmission of COVID-19 in the state.

The state Commissioner of Police, Imohimi Edgal, who led members of the COVID-19 Team on Tuesday demolished the Knowledge of God Ministry building located at Paulinus Urua Street, Uyo, and arrested its pastor, Prophet Victor Elijah and some members of the church.

The newly appointed Chief of staff to Governor Udom Emmanuel of Akwa Ibom State, Ephraim Inyang-eyen, while briefing newsmen on the incident said he was shocked at the number of people crammed in one cubicle during a prayer meeting.

Inyang-eyen who oversees the Ministry of  Works in the state explained that the pastor and some of his members were arrested for violating the guidelines governing the conduct of church services in the state.

He said, “We got a tip from a concerned citizen informing us that a certain church located at Paulinus Urua Street, Uyo, behind the Ministry of Works was having a special prayer service and we immediately responded.