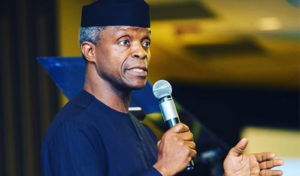 The Police Command in Niger State says it is fully ready to provide adequate security before, during and after Vice President Yemi Osinbajo’s visit to the state on Saturday, January 12.

The Commissioner of Police in the state, Mr. Dibal Yakadi, made this known in an interview with the News Agency of Nigeria in Minna on Friday.

Yakadi said that an effective operational order on how to provide security at each of the places that the Vice President was expected to visit had since been issued to the officers deployed for that purpose.

He said that the command had taken concrete security measures to ensure a peaceful visit.

‘’We have mobilised sufficient armed personnel to provide security cover for our Vice President before, during and after the visit,’’ Yakadi said.

The commissioner also said that the command had already embarked on “Operation Show Force’’ with other security agencies to show our preparedness for the visit.

He explained that the measures were aimed at giving the residents of the state the opportunity to welcome the Vice President without any security threat.

The commissioner advised leaders of political parties in the state to impress it on their supporters to shun all forms of violence and thuggery before, during and after the Vice President’s visit.

Yakadi said: “We will not tolerate any act capable of bringing confusion before, during and after the visit.’’

He warned that any person or groups found wanting would be arrested and prosecuted.

The commissioner said that during the Vice President’s visit, the TraderMoni Scheme of the Federal Government would be introduced to traders at Gwari and Tunga markets in the metropolis.

According to him, the visit will also afford the Vice President the opportunity to flag off the All Progressives Congress (APC) Governorship campaign.

NAN reports that the Federal Government’s TraderMoni scheme is a collateral-free loan to traders, that ranges from N10,000 to N50,000, depending on how well the borrowers are able to make repayments.