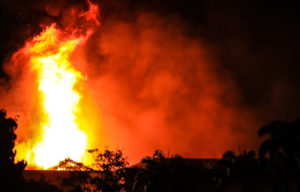 According to reports, the devastated mother, Blessing Nwafor, had two containers, one of them she used for her shop and the other she lived in with her children.

On Thursday, she left her children namely Chimierie Nwafor, five years; Onyedika Nwafor, four years; and Esther Nwafor, three years, inside the shop and went out to sort some other businesses.

Fire started from the shop and quickly spread into the house. The fire spread so fast it was difficult to contain. The children were all burnt beyond recognition.

The police later came in to remove the charred remains of the victims to the Bex Hospital’s mortuary.