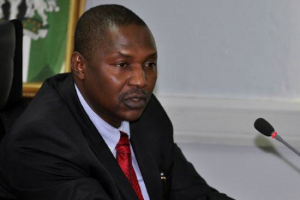 The family of the late Inspector Mark Ediale, one of the three policemen killed by soldiers in Taraba State to free a kidnap kingpin from custody on August 6, 2019, has filed a suit seeking an order compelling the Attorney-General of the Federation and Minister of Justice, Mr Abubakar Malami (SAN), to prosecute the indicted soldiers.

The family, through its lawyer, Mr. Femi Falana (SAN), filed the suit marked FHC/ABJ/CS/724/2020 before the Federal High Court in Abuja, on Monday.

In the court documents, copies of which WE4WE REPORTS obtained on Wednesday, Mark’s brother, Chief Andrew Ediale, represents the family as the applicant while Malami was sued as the sole defendant.

The Inspector-General of Police, Mr Adamu Mohammed, had earlier in February this year, filed terrorism charges against the kidnap kingpin, Hamisu Bala, widely known as Wadume, along with the 10 soldiers led by Captain Tijjani Balarabe of the 93 Battalion in Takum, Taraba State.

But within days of his taking over of the matter from the police in June this year, the AGF amended the charges removing the names of the 10 soldiers from the charges.

Acting as the Ediale family’s lawyer,  Falana had on June 15 sent a letter to Malami asking him to arrest and file charges against the soldiers within seven days, which lapsed on June 22.

The lawyer on Monday filed a suit seeking to compel Malami to file charges against the soldiers.

The suit specifically sought an order   “granting leave to the applicant to apply for judicial review and to seek an order of mandamus directing and or compelling the respondent (AGF) to file charges against the soldiers indicted in the investigation conducted into the gruesome murder of officers of the Nigerian Police at the outskirt of Ibi Town, Taraba State on August 6, 2019, in line with the order of the Federal High Court, Abuja Judicial Division in Suit No: FHC/ABJ/CR/30/2020”.

Mark’s elder brother, Andrew Ediale, in whose name the suit seeking the trial of the soldiers was filed on Monday, said in an affidavit filed in support of the suit that the slain policeman was “the breadwinner of the family”

Andrew said the deceased in his lifetime was “solely responsible for the upkeep and provision of material needs of his dependents.”

The case has not been assigned to a judge and Malami has yet to respond to it.