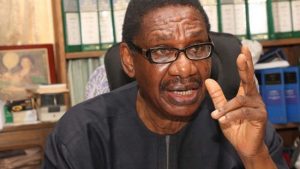 The Chairman of the Presidential Advisory Committee Against Corruption, Prof. Itsay Sagay (SAN), on Monday, criticised the Justice Ayo Salami panel probing the allegations of corruption leveled against the Economic and Financial Crimes Commission and its suspended acting Chairman, Ibrahim Magu, for taking testimonies of suspects being investigated by the anti-graft agency.

Sagay, in a statement titled, ‘Press release by Prof. Itsay Sagay, Chairman of PACAC,’ also noted that Salami appeared to be the only neutral person on the panel which he stated was constituted by representatives of agencies that had leveled allegations against Magu.

Sagay who was denying a media report in which he was said to have been quoted as saying that Magu would not be prosecuted, however, expressed confidence that  Salami would not allow injustice to occur in the panel.

He stated, “What I said was that Magu could not be prosecuted before the Salami Report is out and that Malami’s allegations are just what they are, allegations in a petition.

“No one is prosecuted on unverified allegations as the PDP wanted, otherwise it would be a lost cause from the very beginning.  In my statement, I made it clear that Malami’s petition was just the beginning of a process that could lead to prosecution if solid evidence is established upon investigation.

“I did not say Magu may not be prosecuted.  I am not privy to the politics of the Presidency.  That was from the Daily Independent’s unnamed source in the Presidency.”