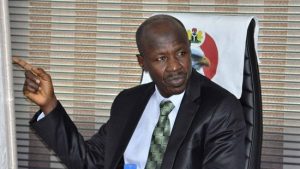 A presidential panel set up by President Muhammadu Buhari on Monday grilled the acting Chairman of the Economic and Financial Crimes Commission, Ibrahim Magu, for six hours at the Presidential Villa, Abuja.

The panel, which was inaugurated about a week ago, interrogated Magu at the old Banquet Hall of the Presidential Villa, Abuja, after he was whisked to the venue by armed operatives of the Department of State Services.

The panel, led by a former President of the Court of Appeal, Justice Ayo Salami (retd.), had about seven other members including the Deputy Inspector-General of Police, Force Criminal Investigation and Intelligence Department, Mike Ogbizi.

The panel also had representatives from the Office of the National Security Adviser, the DSS and other related agencies.

It was learnt that Magu was accosted by security agents in plain clothes in front of the old EFCC headquarters on Fomella Street, Wuse 2, Abuja, around 12noon on Monday.

Magu, who was in his own convoy, was shown a letter of invitation from the presidential panel requesting his presence.

The EFCC boss was said to have explained to the security agents that he would honour the invitation on a future date but they refused to accept Magu’s explanation and insisted that he followed them to the Presidential Villa.

He was subsequently whisked away and brought before the panel where he responded to several questions directed at him.

A top EFCC source said, “Attempts to bring Magu before the panel in the past had proved abortive. So, on Monday, a  team of security agents in plain clothes accosted him around the old EFCC office in Wuse 2.

“Magu’s men quickly put up a resistance but the security officials on the other side quickly corked their guns and insisted that they were following presidential orders. They immediately took Magu into custody and brought him before the panel.”

It was learnt that 24 allegations were levelled against Magu who has been acting as chairman for almost five years.

Most of the allegations, it was learnt, emanated from a report by the Attorney-General of the Federation, Abubakar Malami (SAN), and a DSS report which was submitted to the Senate in 2016 and 2017.

The EFCC boss was accused of living above his means, fraternising with corrupt persons, diversion of recovered funds and many others.

Magu grilled over missing funds, discrepancies in recovered funds, others

The EFCC boss was accused of living above his means, fraternising with corrupt persons, diversion of recovered funds and many others.

He was also accused of insubordination.

Magu, it was learnt, was allowed to leave after about six hours and may be asked to return to make further clarifications.

Meanwhile, it was learnt that the acting EFCC boss might be asked to step down pending the outcome of investigation.

A top source said, “The usual procedure is that when one is facing an investigation of this nature, he would be advised to step down.

“This is because the EFCC is the face of this government’s anti-corruption crusade and keeping Magu there amid this investigation could present a moral challenge.

“I understand that he has been advised to hand over to the next most senior director but he is being adamant.”

We did not arrest Magu, says DSS

The DSS spokesman, Peter Afunanya, denied that Magu was arrested by the agency but he did not explain why he was compelled by operatives to appear before the panel for interrogation.

In a statement titled “Magu not arrested by DSS,” Afunanya wrote, “The Department of State Services wishes to inform the public that it did not arrest Ibrahim Magu, acting Chairman of the Economic and Financial Crimes Commission as has been reported by sections of the media.

“The service has since, today, July 6, 2020, been inundated with enquiries over the alleged arrest.”

Despite the DSS’ denial, however, a source told one of our correspondents that Magu was actually arrested.

“He was actually arrested. He didn’t honour an invitation sent to him, so they plotted and cornered him.

“His driver was forced out of the vehicle and he was driven down to the venue,” the source claimed.

Sources confirmed to  WE4WE REPORTS  that the investigation into the missing funds followed a formal complaint by Malami against Magu.

Malami had reportedly complained to Buhari  about Magu’s conduct and advised that he should be relieved of his appointment.

He was also said to have accused Magu of insubordination and discrepancies in the figures of funds recovered by the EFCC, disposing of assets, especially buildings seized from corrupt politicians and others, without approval, or knowledge of the AGF’s office, which is the supervisory ministry of the EFCC.

The AGF listed various offences allegedly committed by Magu, for which he should be sacked.

It was gathered that the Governor of Central Bank, Godwin Emefiele  and the Minister of Finance, Zainab Ahmed, would also make submissions before the panel on the funds and real estates recovered by the EFCC in order to reconcile them with the records being held by their respective offices.

A source stated, “The President set up a panel to interrogate Magu on the missing funds and discrepancies in the records of recovered funds from politically-exposed persons.

“The justice minister had earlier directed the police to investigate the allegations against Magu, but the government discovered that the police were hiding some information and were not thorough in their investigations. So, they directed the DSS to be part of the investigating team.

“Malami said some of the funds recovered by the EFCC were not in the CBN accounts and he has all the records. The panel is expected to invite the CBN Governor and the Minister of Finance to shed further light on the issue.”

Magu was questioned by panel, not arrested – EFCC

The EFCC spokesman, Dele Oyewale, in a statement confirmed that Magu was questioned by the panel, insisting that he was not arrested as earlier reported.

The statement read, “Magu honoured an invitation by a presidential panel reviewing the activities of the EFCC at the Banquet Hall wing of the Presidential Villa,  Abuja.

“He was served the invitation to the panel,  while on his way to the Force Headquarters,  Abuja for a meeting.

“The EFCC’s boss was neither arrested nor forced to honour the invitation.  A member of a legal team from the EFCC is also with him at the panel.”

Security operatives however stopped State House correspondents from gaining access into the old Banquet Hall of the Presidential Villa, Abuja where Magu was questioned.

Reporters who made attempts to gain entrance into the facility inside the Presidential Villa at about 3.20pm were turned back.

One of the security operatives told the reporters that “They said you people should excuse the use of this place today.”

State House correspondents have a media gallery located inside the facility but were not allowed to access it.

Meanwhile, Magu’s lawyer, Mr. Oluwatoyin Ojaomo, has said the forces behind corruption in Nigeria are more powerful than Covid-19.

Ojaomo said this on Channels Television’s ‘Politics Today’ programme on Monday while reacting to the investigation of Magu by the presidential panel.

The lawyer said his client was under probe because of the disparity in the figures of recoveries he announced publicly and the funds remitted to the government’s coffers.

He said the funds remitted were more than the monies declared.

Ojaomo said, “When you are fighting corruption, the forces behind corruption are so powerful; they are more powerful than COVID-19.

“You can imagine what is happening. Instead of Magu to be celebrated, those powerful corrupt persons who have the media backing them are trying to call a dog a bad name so they can hang it.”

The lawyer said asset recovery was a continuous process and as such there would always be discrepancies in figures.

Magu has been occupying the office in an acting capacity since the National Assembly twice refused to confirm his nomination to head the anti-graft agency after the President sent his name to the federal lawmakers.

The eighth National Assembly  under Dr Bukola Saraki refused to confirm him based on a security report by the DSS.

The secret police had accused Magu, a Commissioner of Police, of occupying a residence rented for N40m at N20m per annum, noting that the accommodation was paid for by a businessman, Air Comm. Umar Mohammed (retd.), who was subsequently arrested by the secret service.

The DSS investigation also indicated the acting EFCC chairman embarked on official and private trips in a private jet owned by Mohammed.

A  whistleblower, George Uboh, had also accused the EFCC of looting over N1 trillion recovered loot.

Uboh in a video posted on social media accused the commission’s leadership of selling off properties of accused persons and diverting the proceeds into a private pocket.