President Trump has described Mexico as one of the world’s “most dangerous” countries in a Monday night tweet.

The president claimed that drug cartels are “in total control” of the area south of the U.S. border and warned that Mexico “must eradicate this problem.”

“The Coyotes and Drug Cartels are in total control of the Mexico side of the Southern Border. They have labs nearby where they make drugs to sell into the U.S. Mexico, one of the most dangerous country’s in the world, must eradicate this problem now. Also, stop the MARCH to U.S” Trump tweeted.

Just last week, Trump claimed that Mexican soldiers pulled their guns on U.S. troops “as a diversionary tactic” to cover for drug smugglers. 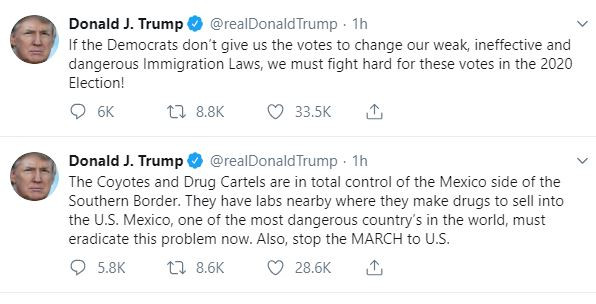 Two U.S. soldiers were stopped earlier this month by Mexican soldiers who thought they had mistakenly crossed the border, at which time a Mexican soldier reportedly confiscated a service pistol from one of the troops. The majority of drugs crossing the U.S.-Mexico border covertly enter at legal ports of entry.

In a second tweet Monday, President Trump repeated calls for Democrats to back tougher immigration laws. “If the Democrats don’t give us the votes to change our weak, ineffective and dangerous Immigration Laws, we must fight hard for these votes in the 2020 Election!” he wrote.