Here is a photo of the 41-year-old commercial bus driver identified as Jelili Lawal, that allegedly raped a 78-year-old woman in Lagos. The commissioner of police in the state, Imohimin Edgal, who confirmed Jelili’s arrest, told newsmen that the Septuagenarian had asked for directions to a place in Lagos from the suspect who instead lured her to a secluded place and raped her. 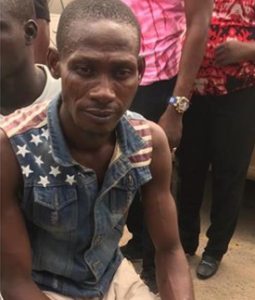