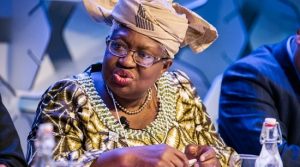 Nigeria’s Former Finance Minister, Okonjo-Iweala has commended the Economic Community of West African States (ECOWAS) for endorsing her for the position of the Director-General of the World Trade Organization (WTO).

ECOWAS head, Mahamadou Issoufou, had announced the endorsement on Monday.

Issoufou acknowledged, “the strong academic and professional background of Dr Okonjo-lweala and her very large experience in national affairs as Nigeria’s Finance Minister (2003-2006 and 2011-2015) and Nigeria’s Foreign Affairs Minister briefly in 2006″.

Reacting on Twitter, Iweala while thanking the African community for their support, explained that WTO has a role to play in the transformation of countries’ economic prospects.

She wrote, “A big thank you to the Economic Community of West African States @ecowas_cedeao for supporting my candidacy for DG of WTO.

“The World Trade Organization has an irreplaceable role to play in transforming countries’ economic prospects and the lives of people around the world.”