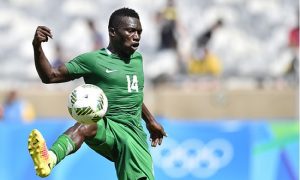 Azubuike Okechukwu has emerged champion of the Turkish Super Lig with his club Istanbul Basaksehir, with one game left to play after they beat Kayserispor 1-0 on Sunday.

He becomes the fifth Nigerian to win the Turkish Super Lig title after Henry Onyekuru with Galatasaray and the trio Uche Okechukwu, Joseph Yobo and Emmanuel Emenike with Fenerbahce.

Istanbul Basaksehir have ammassed 69 points, while Trabzonspor have 62 points, going into the final games of the season.

The title win for Istanbul Basaksehir also snapped the dominance of the Super Lig’s top teams Fenerbahce, Galatasaray and Besiktas, who have won the Super Lig title 54 times between them.

They also became the sixth club to win the Super Lig title since its inception in 1959 after Fenerbahce, Galatasaray, Besiktas, Trabzonspor and Bursaspor.

Meanwhile, WE4WE REPORTS reliably gathered that Istanbul Basaksehir have offered Okechukwu, who has made 17 league appearances for the champions, a deal to remain at the Turkish club.

Okechukwu is currently on loan from Egyptian club Pyramids.

“He (Okechukwu) has been rewarded with a new deal by Istanbul Basaksehir. We just want the news out from the club first,” the source told WE4WE REPORTS.

The former U-23 captain previously featured for Rizespor and Yeni Malatyaspor in Turkey as well.