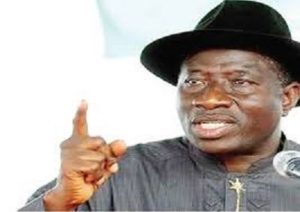 Kinsmen of former President Goodluck Jonathan on Tuesday insisted that the ex-President and his wife, Patience, were working against candidates of the Peoples Democratic Party in the forthcoming elections in Bayelsa State.
The kinsmen, under the aegis of the Ogbia Renaissance, said a report in one of the national dailies was a vindication of their earlier position that the former President was engaging in a plot to subvert his own political party for selfish considerations.
The Chairman, OR, Mr Obhioru Mitanoni, said Jonathan, his wife, A.J. Turner and other PDP chieftains were engaging in anti-party activities ahead of the legislative elections in the state.
The group had in an earlier statement alleged that Jonathan was secretly sponsoring candidates of other parties, including the All Progressives Congress, Accord Party and the African Democratic Congress against those of his party in Bayelsa.
Mitanoni said the action of the former President was what caused a disagreement between him the state Governor, Seriake Dickson.
He alleged that Jonathan was backing a former Chief of Staff, Samuel Ogboku, of the APC for House of Representatives and Senator Nimi Amange, who defected to the ADC to contest the Bayelsa East senatorial election.
He said the former President opted to support candidates of other parties because his candidates in the PDP failed to win the last party’s primaries.
Mitanoni said it was sad that the former President took “the display of political pettiness to a disgusting low unbefitting of his status as a former President of the country and national leader of the PDP.”
He said Jonathan was acting against his status by deciding who became a councilor, local government chairman and House of Assembly member in his native Ogbia.
Mitanoni said rather than playing the role of a statesman at the national and international level, Jonathan would “rather opt to demonstrate his lack of capacity for inclusive leadership.”
He said it was regrettable that Jonathan was backing candidates of other parties through his wife and Turner while pretending not to know the anti-party activities of his minions.
He called on the Chairman of the PDP, Uche Secondus, to take urgent steps to avert an impending disaster threatening the electoral fortune of the PDP in the next election.
But the ex-President’s media aide, Ikechukwu Eze, had in a recent statement said there was no truth in the claim that Jonathan was engaging in anti-party activities.
He had said, “It is manifestly dishonest, deceitful and preposterous for anybody to suggest that former President Goodluck Ebele Jonathan is working against the interest of the party under which he rose to occupy the highest office in the land.”