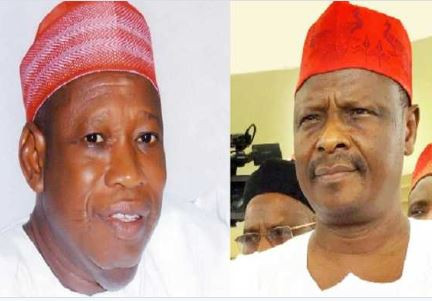 Kano State governor. Abdullahi Ganduje has accused his predecessor, Rabi’u Musa Kwankwaso, of funding his presidential campaign with funds budgeted for road construction in the state.

Ganduje made the revelation on Wednesday at the inauguration of campaign committees for his re-election bid. He also vowed to investigate Kwankwaso over a multi-billion Naira road project. He revealed that the issue had been taken to the Economic and Financial Crimes Commission (EFCC) for investigation.

According to Ganduje, so far, investigation by EFCC revealed how Kwankwaso used money budgeted for the construction of five-kilometre roads in the 44 local governments of Kano state for  his presidential campaign in 2015.

However, Kwankwaso collected the 90 per cent from the 44 local government, paid the mobilisation fee and funded his presidential campaign with the remaining balance. The Kwankwasiyya people have started campaigning with the 5km road project, but I will expose them.”

He also alleged that EFCC discovered that the funds were converted to dollars. However, Comrade Aminu Abdulsalam, a commissioner under Kwankwaso’s government, said the allegation raised by Ganduje was a ploy by the governor to  “to divert people’s attention”.

It was confirmed by Abdulsalam, who is the running mate  to the PDP gubernatorial candidate, Engineer Abba Kabir Yusuf, that the contract took effect during Kwankwaso’s tenure but originated from Ganduje’s office when he was the deputy governor and commissioner for local government.

“Let him tell the public how the contract was awarded, what happened to it and who the contractors are. The 5km road project was not the case investigated by the EFCC and it is not Ganduje that took the case to EFCC. The EFCC has finished that case,” he said.  Ganduje, himself, has in recent times been riddled with corruption allegations.  He was recently revealed in a leaked video allegedly collecting kickbacks from contractors.