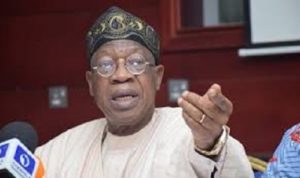 The Federal Government on Tuesday in Abuja admitted that the fight against insurgents had recorded some setbacks. Minister of Information and Culture, Alhaji Lai Mohamed, stated this while reacting to the weeping by the Governor of Borno State, Kashim Shettima, at the Presidential Villa in Abuja on Monday.

Mohammed said, “It’s important to note that the governor said that despite some setbacks, the state retains confidence in the leadership of President Muhammadu Buhari and his ability to end the insurgency.

“There is no doubt the fight has recorded some setbacks in recent times, but our gallant troops are up to the task and are doing their best to keep the nation secure.

“These setbacks are not unconnected with the routing of ISIS in Syria and Iraq and the focus of the terrorists’ attention on the insurgency in Nigeria.”

He said the President had rallied regional cooperation to forge a united front against the terrorists.

Mohammed announced that his ministry would soon launch a massive national campaign in support of the military, especially in their fight against insurgency.

“We are planning to launch a national campaign to rally support for the military. We believe the men and women who are risking all to keep us safe deserve the support and prayers of all Nigerians, not vilification, insults and other acts that are capable of dampening their morale,” the minister said at a press briefing in Abuja on Tuesday.

“I think it is high time everybody, irrespective of political affiliation, joined in supporting the war (against insurgency).

“It’s not unusual; as a matter of fact it’s usually the practice, that when a country is faced with this kind of challenge, people will sink their differences and work together.”

He said the national campaign would be multi-faceted and would include the production and airing of special jingles on radio and television, social media intervention and advocacy.

He said, “I think the biggest opposition probably today that the military has is probably not Boko Haram, it’s probably the social media because it’s so uncontrolled.

“Today, video clips are doctored and clips of happenings in other lands are now reported and sent out as if they are happening in Nigeria. Unfortunately, there is no one to hold responsible. This is very discouraging and it demoralises the military.

“That brings me to the bigger issue of overall support for our military. Recent developments are disturbing. The activities of a section of the media and some opposition political parties are demoralising the military and strengthening the insurgents.”

He added, “Without seeking or waiting for official clarification, outrageous casualty figures are prominently reported. Without consideration for national security, military plans are recklessly revealed. Not even in the United States, the bastion of democracy, does this happen.”

He appealed to the media to exercise restraint in their reportage of the war against insurgency in the country.