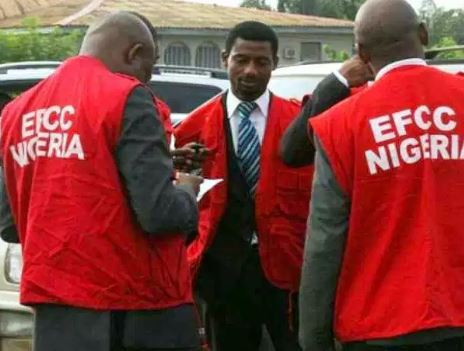 EFCC, on January 14, 2019 secured the conviction and sentencing of one Adewale Dalmeida, an employee of Dangote Cement, Ibese, Ogun State, to five years imprisonment before Justice O. J. Bamgbose of the High Court of Ogun State, Abeokuta for an offence bordering on conspiracy and stealing to the tune of N15, 000, 000 (Fifteen Million Naira) only.

Dalmeida along with Ibrahim Lawal, Lukman Adam and Afeez Olaniba were arraigned on December 6, 2018 on a two-count charge bordering on conspiracy and stealing to the tune of N15 million.

The defendants were said to have diverted the trucks carrying the bags of cement, which were meant for the company’s customers in Togo, using fake identification cards and number plates. The defendants pleaded not guilty to the charge when it was read to them.

The Judge remanded the defendants in Ibara Prison custody, Abeokuta, Ogun State and adjourned till December 17, 2018 for hearing of their bail applications and commencement of trial.

At the next adjourned sitting on December 17, 2018, counsel to the first defendant, Adewumi Adisa, told the court that he had filed a bail application on behalf of his client, Dalmedia, and also expressed the intention of his client to change his earlier plea of not guilty to guilty.

Consequently, the court had ordered the charge to be read to the defendant, who pleaded guilty to the two-count charge. Also, counsel to second defendant, Z. D. Garuba, told the court that he had not filed any application on behalf of his client, Lawal, because he wanted to enter a plea bargain.

At the close of the review of the facts and adoption of plea bargain agreement, Justice Bamgbose had convicted the defendants on both counts on December 21, 2018 and adjourned to January 14, 2019 for sentencing of the convicts. At the proceedings, Justice Bamgbose sentenced the first convict to two and a half years imprisonment on each count. The sentences are to run concurrently from the date of arrest and detention, being September 14, 2018.

The Judge also ordered that the money and property recovered from the convict should be forfeited to Dangote Cement. The second, third and fourth defendants were each sentenced to eight months imprisonment on each count. The sentences are to run concurrently from September 12, 2018.

The convicts were all ordered to enter into a bond with the Commission to be of good character and never to commit any crime again in or outside the country.