A father killed his newborn son in anger after losing a video game, police have said.

Anthony Trice, 26, was at his home in Louisville, Kentucky, playing a video game on Friday. He lost the game and flew into a rage then threw the controller before punching his son named De’Anthony Trice.

The blow seriously injured the child then Trice picked him up and took him to the kitchen to prepare the child’s milk. He is said to have dropped the newborn onto the floor, before picking him up again. It is unclear whether Trice dropped his son deliberately, or by accident.

WLKY said that afterwards, Trice took the boy into a bedroom and propped him up in a seated position. He went to the bathroom, returned to find the little boy was in distress, and dialled 911, it is alleged.

The child was rushed to Norton Children’s Hospital,  Louisville, Kentucky, where he died on Sunday, May 5 2019. 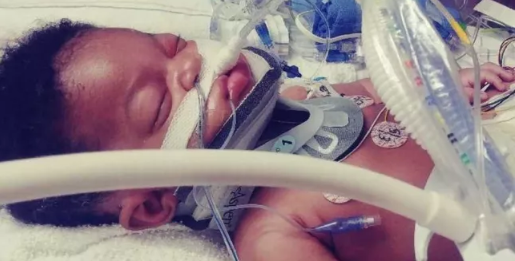 The chid’s grandma Tonija Michelle showed De’Anthony hooked up to a ventilator before he passed away.

Trice was initially charged with first-degree child abuse, with those charges upgraded to first-degree murder after the baby died. He appeared in court Monday, where his bond was raised to $1,000,000.