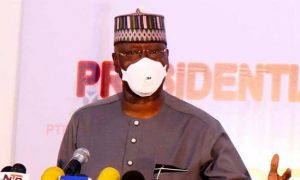 The hope of sports returning to normalcy in the country has suffered a huge blow as the Federal Government insisted that it was not safe to resume sporting activities.

Chairman of the Presidential Task Force on COVID-19, Boss Mustapha, stated this during a press briefing in Abuja on Monday.

He disclosed that the latest developments were contained in the task force’s fifth interim report, which was submitted to President Muhammadu Buhari earlier in the day.

Mustapha said, “I am pleased to inform you that Mr President has carefully considered the fifth Interim Report of the PTF and has accordingly approved that, with the exception of some modifications to be expatiated upon later, the phase two of the eased lockdown be extended by another four weeks with effect from Tuesday, June 30, 2020 through midnight of Monday, July 27, 2020.

“Specifically, however, the following measures shall either remain in place or come into effect.

“We will maintain restrictions on mass gatherings and sporting activities.”