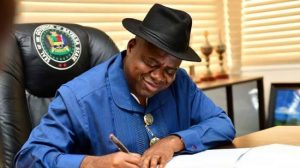 The Governor of Bayelsa State, Mr Douye Diri, on Thursday said he did not form his cabinet since February 14 when he was sworn in because of litigations challenging his emergence as governor.

Diri spoke during his first meeting with the state council of traditional rulers at their secretariat in Yenagoa, a statement by his acting Chief Press Secretary, Mr Daniel Alabrah, said.

The governor said he would announce the nominees for the State Executive Council next week.

Diri, in the statement, said he was mindful of the expectation of the people concerning the constitution of his cabinet, but sought their patience.

He said, “Since I was sworn in as governor, I have not met with our traditional rulers as a council. So, I’m happy to be here today.

“Now that we have dispensed with most of the litigations, let me inform our royal fathers that I am ready to constitute my cabinet from next week.”

Diri urged them to work closely with his administration in promoting peace and stability in their communities, describing them as community leaders closest to the people.