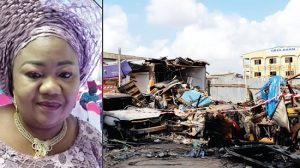 Uchechi, whose husband is based in Malaysia, died on June 30, 2020, as a result of machete cuts inflicted on her by the hoodlums, who invaded her residence at night.

Sources in the area, however, alleged that Uchechi’s husband and his younger brother had a hand in her gruesome murder.

According to the sources, the deceased’s husband was uncomfortable with allegations that his wife was involved in extramarital affairs.

The husband and his younger brother, it was alleged, conspired with the hoodlums to kill Uchechi.

Though the two girls survived the attack, our correspondent learnt that the machete cuts on the woman’s body left her with no chance of survival.

A source in the community, who spoke on condition of anonymity for security reasons, said Uchechi, who was in her late 30s, cried for help but nobody in the neighbourhood heard her as she was butchered to death.

The source stated, “Her eight-year-old daughter, who begged the assailants to spare her mother’s life, was also dealt machete blows. But she survived the attack after being rushed to hospital the following morning.

“The woman was operating a pub, where she also sold fresh fish pepper soup. The police have arrested some persons, including the younger brother of her husband.”

On the buildings that were destroyed, the source said, “The burnt houses belong to those suspected to be behind the killing of the woman.”

Our correspondent also learnt that while four of the burnt buildings were located in the Amakohia community, the fifth was the property of one of the suspects, identified simply as Onwuka.

When contacted, the state Police Public Relations Officer, Orlando Ikeokwu, confirmed the murder of the woman and said, “The matter is still being investigated.”

Ikeokwu said he could not immediately speak on the burning of houses by irate youths in Amakohia and the alleged arrest of the deceased’s brother-in-law.

While a text message sent to him had not been replied, his response to several calls to his mobile phone was that he would respond later, which he had not done as of the time of filing this report.