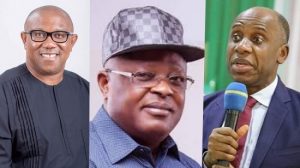 A coalition of Igbo Groups, have lined up the Minister of Transport, Chibuike Amaechi, Dr Ogbonnaya Onu, Governor David Nweze Umahi, and Peter Obi for 2023 presidency.

The coalition comprising World Igbo Youth Congress, Southeast Women Professionals and Igbo Students Union described the decision of Arewa Youths to form an alliance with Ohanaeze Ndigbo Youth Council Worldwide ahead of the 2023 general elections as a welcome development.

The Coalition said the development was an affirmative action that both groups will definitely present a consensus candidate in 2023.

It made its resolutions known after a meeting with the leadership of Ohanaeze Ndigbo Youth Council Worldwide in Abakaliki Ebonyi State on Thursday.

The Coalition emphasized that Igbo presidency in 2023 is the most equitable and Justifiable crusade that will make “Nigeria survive from disintegration and disaster that pose threats against her collective existence.”

“With this development and after deliberating on the issues extensively in line with Igbo interests, we present Chibuike Amaechi (Rivers) Dr Ogbonnaya Onu (Ebonyi), Governor David Nweze Umahi (Ebonyi) and Mr Peter Obi (Anambra) PDP and others,” to run in the election.