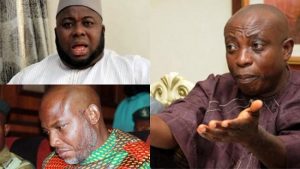 The Biafra Nations Youth League, BNYL, has warned Nnamdi Kanu of the Indigenous People of Biafra, IPOB; Chief Ralph Uwazuruike of the Biafra Independence Movement, BIM; and a former Niger Delta militant leader, Asari Dokubo, to back off the Biafra struggle if they have lost focus.

The group was reacting to religious squabbles going on among the secessionist leaders.

Uwazuruike and Dokubo had recently lambasted Nnamdi Kanu for insisting that some sorts of religion would be prohibited in the yet-to-be actualized nation.

However, the BNYL’s Director of Operations, Biafra Broadcasting Service, BBS, Ebuta Takon Akor, in a statement to WE4WE REPORTS on Sunday, disclosed his group position on the issues that have generated much controversies in the media.

The BNYL dismissed claims that Biafra will be built on religion, saying the State of Biafra is dominated by Christians and traditional believers and no one can change it.

The group hinted that the BNYL will not tolerate whoever is presenting his religious ideology in the struggle, adding that both Jewish and Christians have one Biblical belief apart from the way of worship and both would not conflict in a Biafran state.

“Jews and Christians are directly connected and their way of worship won’t be conflicting with the constitution of Biafra.

“We know that Biafra is dominated by Christians, which automatically makes it a Christian State and we understand that thousands of Biafrans are Judaist and many into traditional belief system.

“Any religion that promotes jihad and shedding of blood will not be tolerated by the majority Christian Biafra.

“The secessionist leaders must sheathe their sword or back off from the struggle if they have nothing to offer.”